Comedy as a Weapon is throwing its first outdoor comedy show and you’re invited. This July 11th at JJ’s Tavern in Florence MA. The crew comes back together along with comedians Darren Rivera, Eryca Nolan, and Phillip Anthony all hosted by the very funny Kim DeShields, and Tim Lovett.

Darren Rivera AKA “The Rice and Bean Joker” has been entertaining audiences for more than a decade; whether it’s been Colleges & Universities or Comedy clubs all across the United States. Darren has won WCCC Local Comic Standing and been runner-up in The Funniest Comic in New England. Darren’s brand of humor is sarcastic, witty, and real to his life experiences. He has opened for Joy Koy, Aisha Tyler and Gilbert Gottfried. Darren is originally from the Bronx, spent his adolescence in Bucks County, PA and began his comedy career in Hartford, CT. Darren takes these life experiences and puts them on stage to entertain the masses

Eryca Nolan A Mom and Comedian, Eryca Nolan considers herself a work in progress when it comes to balancing these two acts.

More of a Story Teller than a Jokester she entertains you with wit and unfiltered honesty as she expresses her take on Single Motherhood, Love, and most importantly Wine.
Whether you are a Mom or have a Mom, her tales will make you feel right at home.

She has performed at Cozzy’s Comedy Club, Appeared on TVOne’s Crime Series For My Man and Thou Shalt Not, Featured on Season 7 of Comics Watching Comics on Amazon Video
as well as the Moms at the Movies Segment on WUSA9’s Great Day Washington.

Considered the Original Bad Mom of Comedy, Eryca Nolan is Funny as a Mother.

Phillip Anthony is a fast-rising comedian and co-founder of Laughing Latinos Comedy. In his first year as a comedian, Phillip was ranked one of the Top 10 Funniest Comics on the East Coast. Round 2 Winner of Clash of the Comics at the Hartford Funny Bone. Since then Phillip has taken some of the biggest stages on the East Coast, including Springfield Symphony Hall where he hosted the Netflix “Truth Hurts” tour featuring Willie Barcena and Steven Michael Quezada, Phillip Anthony has performed at Foxwoods Casino COMIX as well as world renowned Comedy Clubs like DANGERFIELD’S, BROADWAY COMEDY CLUB, LEVITY LIVE, HELIUM in Philly, FUNNY BONE (Manchester and Syracuse), BREW HA HA in Hartford, COMIC STRIP LIVE and many more.

With a unique perspective on being “Sorta Rican”, Being Broke and Latino stereotypes, Phillip Anthony brings a friendly urban style to the stage. Phillip Anthony shares his life stories from growing up in the Bronx, his mother, and his time in the military to his crazy relationship experiences.  Phillip Anthony is available for all occasions and venues.

Ticket price is $15.00 per person and $10.00 per person for groups of 4 or more. To promote social distancing we encourage you to purchase a table so you don’t have to sit with people you don’t know. We are also are equipped to handle larger groups up to 12 at a table.

Seating starts at 6:30 and jokes start 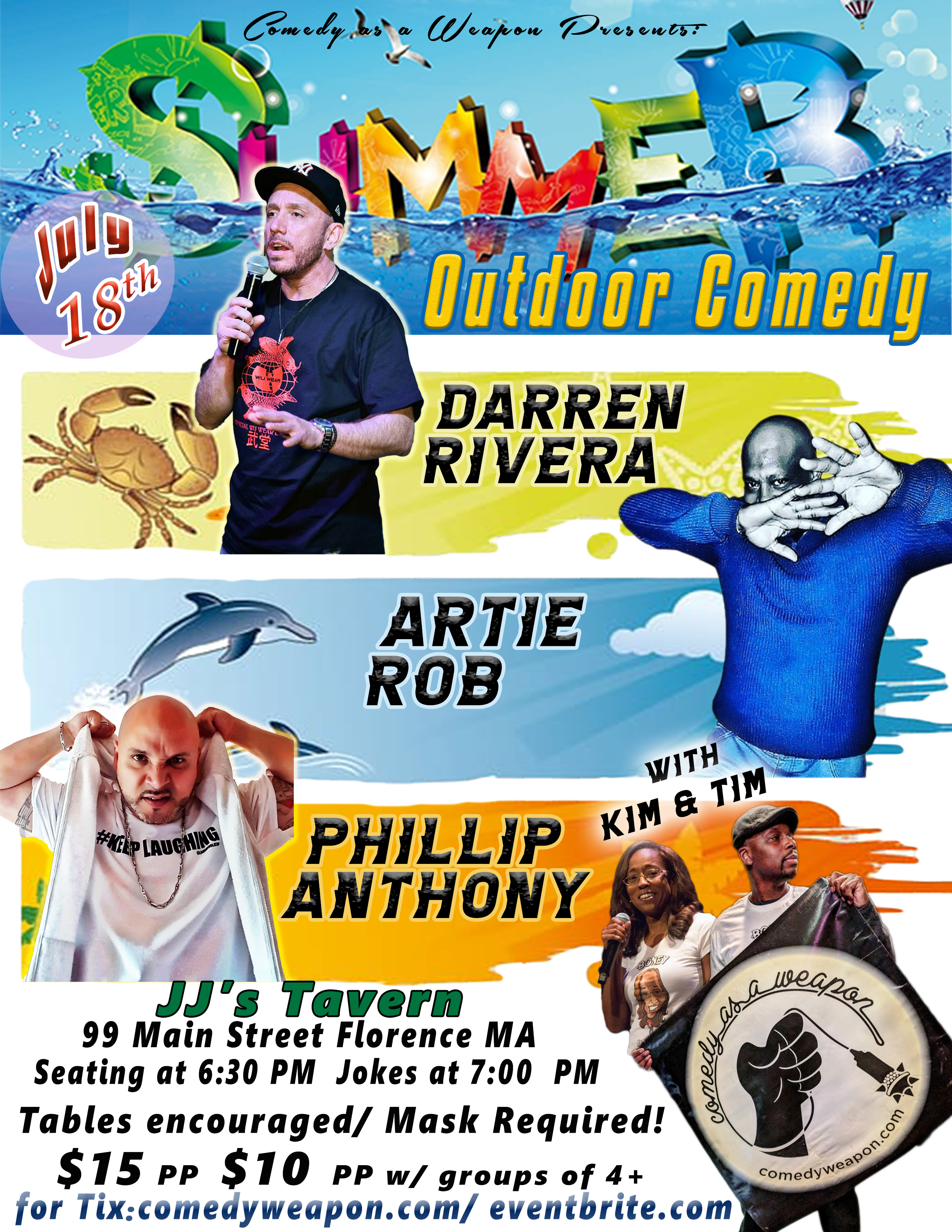