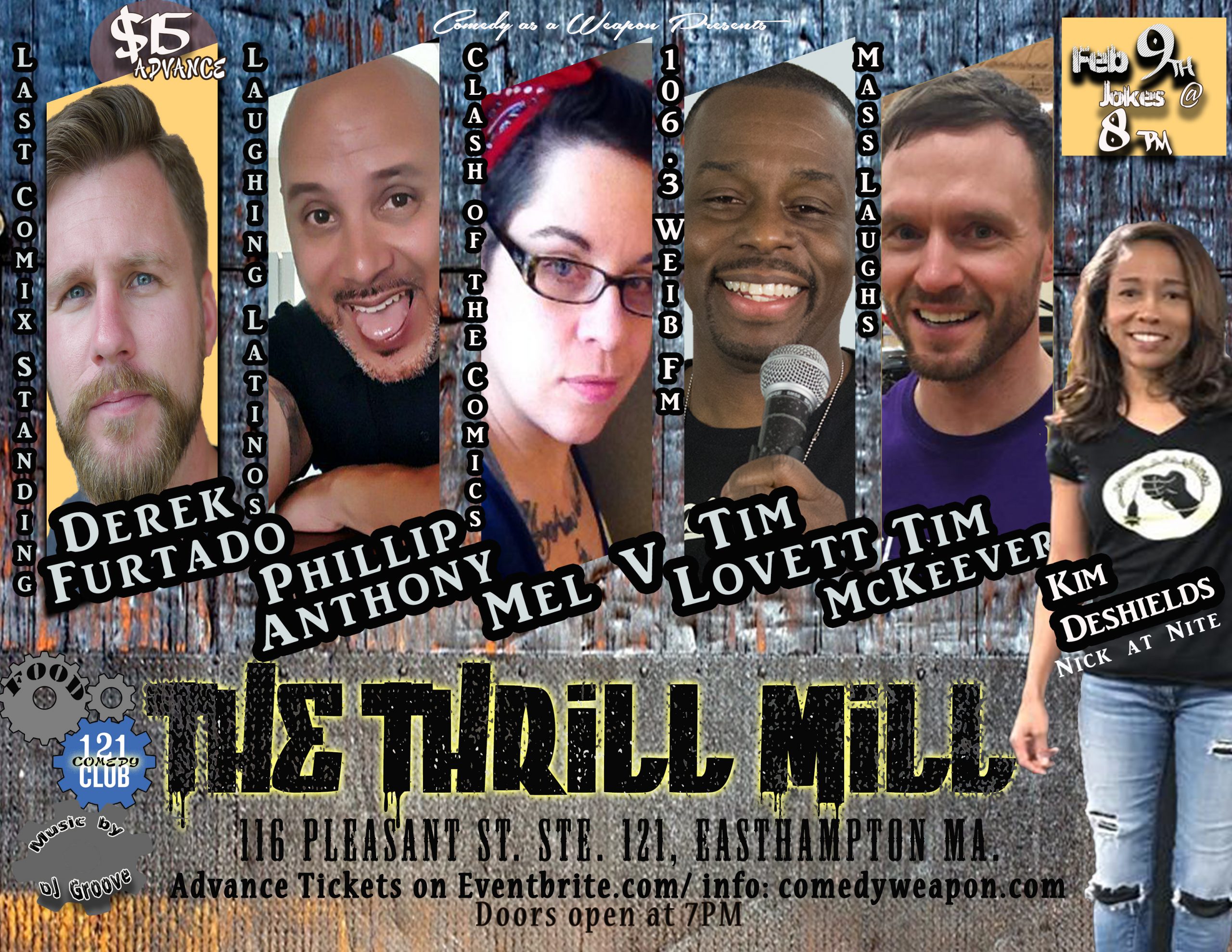 On February 9th, Comedy as a Weapon presents The Thrill Mill. Derek Furtado (Last Comix
Standing) will headline, the latest in a series of comedy shows at the 121 Club at Eastworks in
Easthampton, MA. Comedy as a Weapon’s own Kim Deshields (Nick at Nite) will host the
colorful event. Other the comedians taking the stage include Phillip Anthony (Laughing Latinos
Comedy) Mel V, (Clash of the Comics champion) CAAW producer Tim Lovett, (106.3 Smooth
FM) and Tim McKeever (Mass Laughs Comedy). The evening will include finger food, and the
musical mixings of the one and only DJ Groove of Good Groove Entertainment.

Derek Furtado – A contagiously energetic comedian from New England who has performed
from one coast to the other. Derek’s style of comedy brings uncomfortable moments to life
with his attention to detail that will have you relieved you’re not the only one who feels “that
way.”

Kim Deshields – Good things come in little packages. With a winning combination of sass and
hard edged truths, Kim Deshields (AKA Boney) offers audiences a hilarious, honest and self-
deprecating look a today’s issues from a middle aged woman’s perspective. Frank and fearless
in her delivery, Boney tackles topics from motherhood, death, sex, marriage to race relations in
America. Born in Amherst, Massachusetts, Boney has had a rise to the top of the comedy game
working clubs throughout Western Massachusetts, Boston, New York City… all the way to
Germany. A semifinalist in 2008 for Nick At Nite’s Funniest Mom, contestant on Last Comic
Standing, and Ladies of Laughter Funniest Female finalist, she has opened for the likes of
comedy giants such as: Tracey Morgan, Bill Burr, Leslie Jones, Mike Epps, Nikki Carr and Arnez
J. While comedy is her first love, in daylight hours you can catch her as Midday Host WEIB
106.3 FM as Smooth Jazz radio host.

Phillip Anthony is a fast rising comedian and co-founder of Laughing Latinos Comedy. Recently
ranked one of the Top 10 Funniest Comics on the East Coast. Round 2 Winner of Clash of the
Comics at the Hartford Funny Bone.

Springfield Symphony Hall, Winner Winter Comedy Festival (Champ of Champs) @ Dangerfield’s
NYC, Winner Spring Comedy Festival Broadway Comedy Club NYC, opened for Mitch Fatel, Nick
DiPaolo, Willie Barcena, owner of Laughing Latinos Comedy
Tim Lovett has entertained people across New England over 5 years. Since starting his Comedy
career in Massachusetts, he has developed into a strong performing comedian. His style is witty
and energetic, and he has something for everyone in the audience to relate to. Tim Lovett is a
must-see.

Lastly, the one and only DJ Groove of Good Groove Entertainment will be playing music before
and after the show. Along with funny we’ll have finger food. Doors open at 7pm; show starts at
8pm. Tickets available at Eventbrite.com or comedyweapon.com