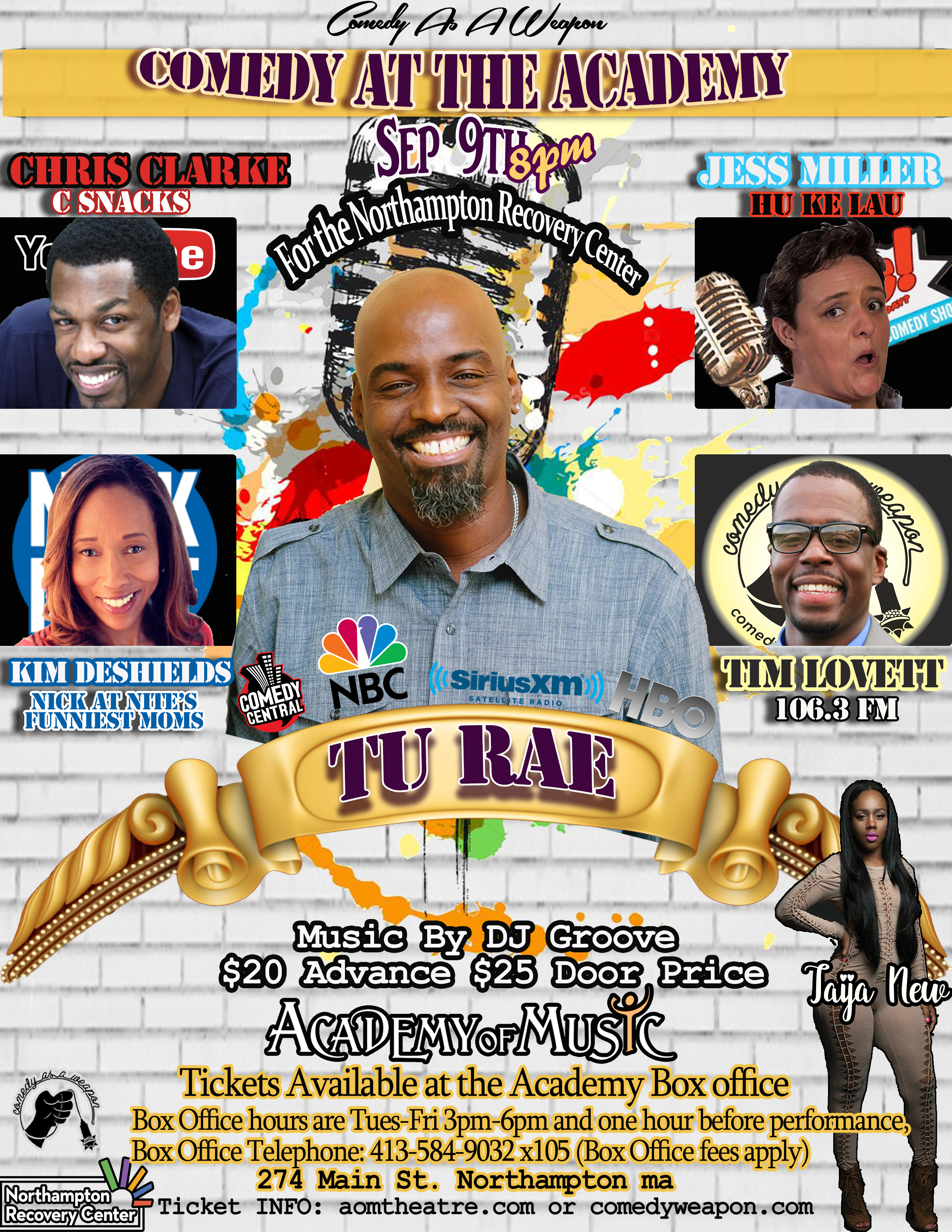 Tim Lovett hosted an amazing show at the Academy of Music in Northampton, opening for none other than Tu Rae (recognized for giving a platform to Kevin Hart). In true Comedy as a Weapon fashion, ‘Comedy at the Academy’ raised funds for the Northampton Recovery Center, an organization for people recovering from substance abuse.

Comedy at the Academy featured the dynamic Taija New, performing her original music. This show also starred Kim “Boney” DeShields (Nick at Nite’s ‘Funniest Mom in America’ contestant), Jess Miller (OMG Wednesdays), Youtuber Chris “C-snacks” Clark, and local talent Laura Fatteruso. Together, the lineup spelled a recipe for success as the audience danced and laughed until through the night.   (September 9, 2017)

“We have partnered with dozens of professional comedians who share and support our vision.” Says Tim Lovett (CEO) their shows offer professional comedians, one host, a musical act, and a deejay. Their shows are hilarious, energetic, thought-provoking, and will certainly leave a lasting impression. They truly believe they are doing life-saving work, and are committed to the ideal of renewing faith in recovery as well as restoring hope in the future.

Mike Yard is a stand-up comedian and a contributor to Comedy Central’s The Nightly Show with Larry Wilmore. He is also the host of podcast “Yard Talk with Mike Yard.” He lives in Brooklyn, New York. Other works include Souled out Comedy (2009) and Holla If I Kill You (2003).

Jess Miller Jess Miller’s stories and take on life will bring you to tears! As a comic, Jess has an ability to get you going right out of the gate! Her style on stage is lovably hilarious and her ability to win over her audience is magic. From Host to Headliner, Jess Miller will have you belly laughing Jess is the Creator and Producer of the very successful “OMG! It’s Only Wednesday?” Comedy Showat the world-renowned Hu Ke Lau in Chicopee, Massachusetts.

Kim DeShields Good things come in little packages. With a winning combination of sass and hard edged truths, Kim DeShields AKA Boney offers audiences a hilarious, honest and self-deprecating look at today’s issues from a middle aged woman’s perspective. Frank and fearless in her delivery, Boney tackles topics from motherhood, death, sex, marriage to race relations in America. Born in Amherst, Massachusetts, Boney has had a rise to the top of the comedy game working clubs throughout Western Massachusetts, Boston, New York City all the way to Germany. A Semifinalist in 2008 for Nick At Nites Funniest Mom, a contestant on Last Comic Standing and Ladies of Laughter Funniest Female Finalist she has opened for the likes of comedy giants such as: Tracey Morgan, Bill Burr, Leslie Jones, Mike Epps, Nikki Carr, and Arnez J. While comedy is her first love throughout the days you can catch her guest hosting on WEIB 106.3 Smooth FM.

Chris “C-snacks” Clarke The high-energetic styled and vivid imagination, Chris Clarke has cemented himself as one of the most enjoyable acts working today. He’s appeared on BET’s 106th Park, Las Vegas Comedy Festival and was the runner up in New England’s Funniest Comic Competition. He was on the 2013 revamped BET Comic View Hosted by Samore. In addition he performed at Gotham Comedy Club, Caroline’s, The Comic Strip”, as well as clubs all over the Northeast. His “Crazy Roomies” tour is a favorite on the college circuit. Chris appeared in countless independent films and sketches. Being a comedic Food critic as a member of “Teamdaym” Chris is known as “C-Snacks.” The team has amassed over 30 million web views with their hilarious and original weekly food reviews on YouTube. Chris was a special guest judge on Food Network’s Beat Bobby Flay. Also, had a one hour special on the Cooking Channel called “Baby Got Snack!’

Tim Lovett “Making people laugh is the greatest job in the world” is the mantra comedian/emcee Tim Lovett has prided his stand-up comedy career on. Born in Lorain, Ohio this undying passion to see a smile emerge on people’s faces is the impetus for his pursuit of the craft. With his witty and energetic brand of humor and hosting Tim knows how to move a crowd with subject matter all can relate to. Interracial relationships, dealings with the everyday man in his community and the average occurrences in life—nothing is off limits for Tim to find the humor. Men and women, young and old can relate to Tim. A must see performer Tim has entertained people across the New England region for over five years and is featured on Northampton Community Television. In addition to honing his emcee/standup abilities, Tim can be found hosting WEIB smooth FM radio. A must-see Tim Lovett is one to watch!

Taija New is a Hip Hop artist from Springfield, Massachusetts. She began writing music during her sophomore year at UMass and publicly presented her music in November 2014. New began her music career by attending open mics weekly with the intent to build her stage presence and sharpen her skills.  Since then she has dropped many remixes to songs like Pusha-T’s Untouchable and Sonny Digital’s I’m the Man. New with her dynamic performances and powerful lyrics wow any audiences.